I’ve made knitted toys before, but after seeing some crochet amigurumi online I wanted to give that a try – I love the texture that using crochet gives.  So after only a little bit of previous dabbling in crochet years ago, I picked up a hook again. 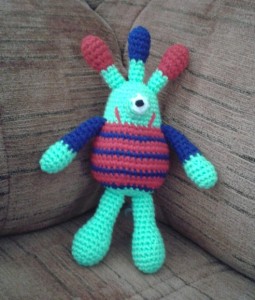 After a fair bit of time browsing the many delightful patterns on Etsy, I settled on these bug eyed monsters by Moji-Moji Design as I thought my young cousins would like them.

I would absolutely recommend Moji-Moji’s patterns as I found the instructions very clear.  In fact, now that I’ve also used and read some other amigurumi patterns, I’d definitely say this is the most accessible one I’ve come across so far. 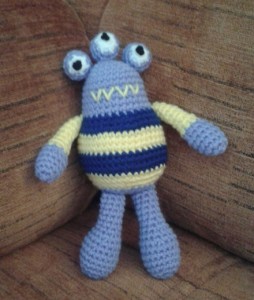 The monsters are pretty simple to make as they only use one basic stitch and you work in a spiral, so you don’t have a seam to sew up at the end.  The eyes and tops of arms could be a little fiddly because the spirals were narrow, but just a tad more concentration and they weren’t a problem. 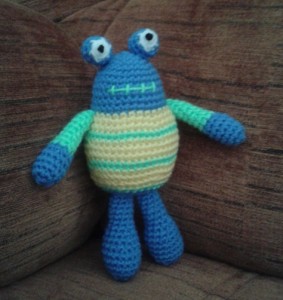 These don’t need much yarn, hence a great way to use up oddments and there are so many possibilities for different colour combinations.  You could add various embellishments if you fancy, but I liked these just as they are with the bright colours.  Instead of safety eyes for the pupils I made french knots out of black yarn (tied securely inside to make them child safe). 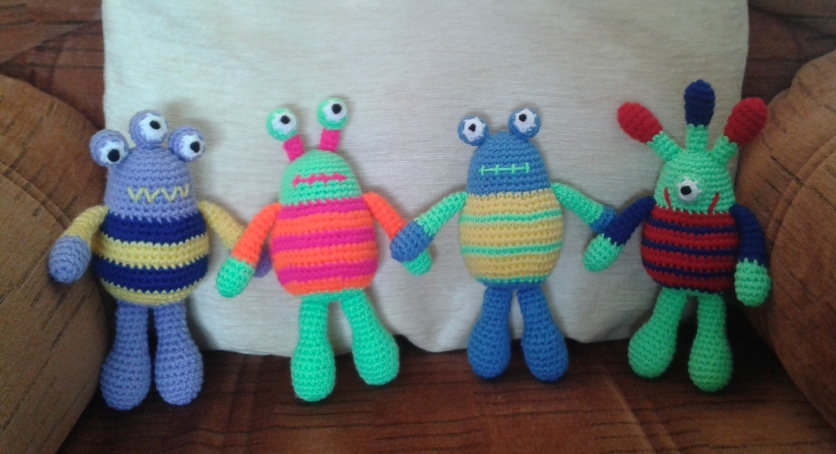 I really enjoyed making these little monsters but had to stop myself after four as I didn’t think the boys’ parents would appreciate a whole army of monsters!